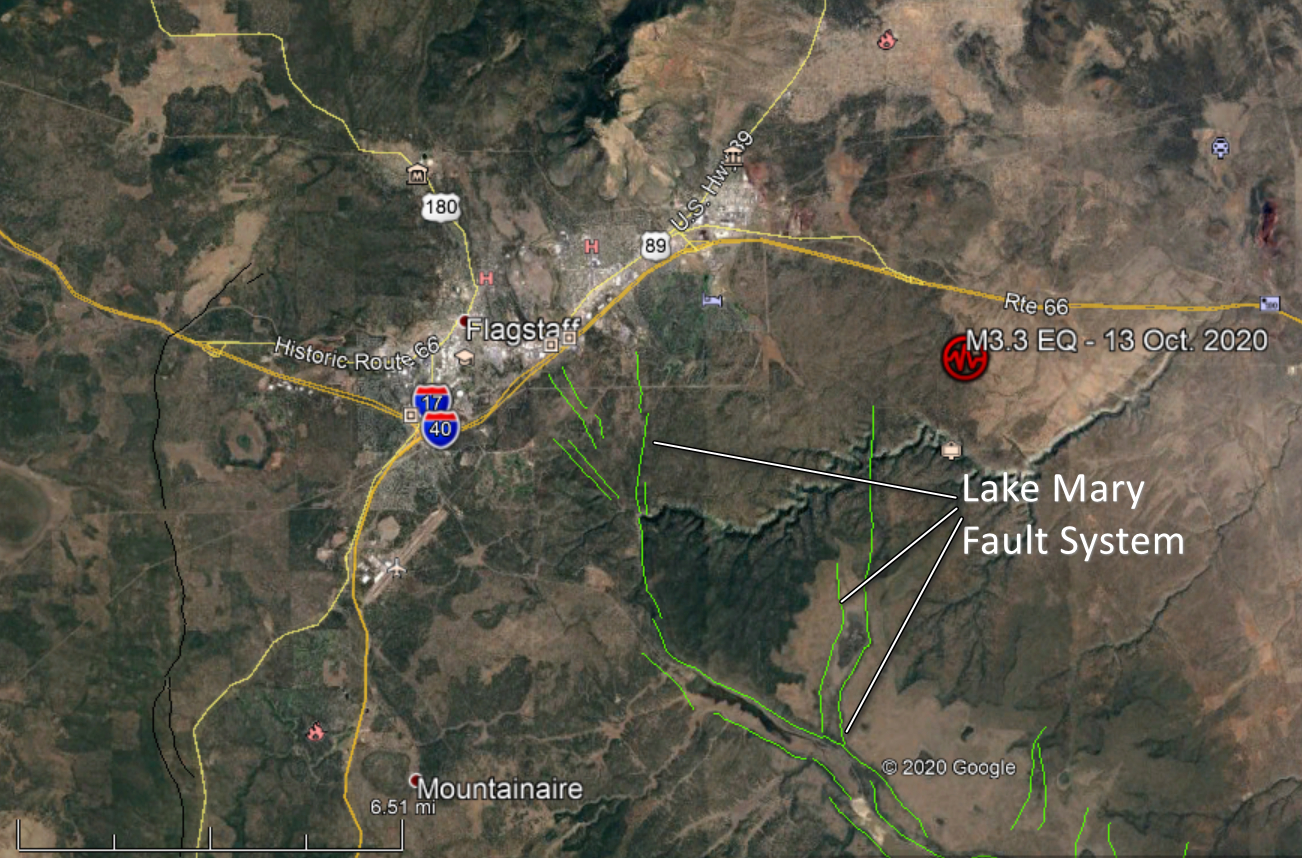 The tremblor originated several miles north and east of the northeastern-most branch of the Quaternary Lake Mary Fault system. There are other suspected Quaternary faults in the vicinity. The M 3.3 event occurred at approximately 5 km depth, but this is a standard depth calculation for much of Arizona due to a generalized crustal model. The latitude/longitude estimate is more accurate, and greatly improves when there are stations nearby, such as BARN (AE, AZGS network) and WUAZ (USGS). The figure below portrays the seismic signal captured by broadband seismometers operated as part of the Arizona Broadband Seismic Network.

The Lake Mary fault system is located in the Northern Arizona Seismic Belt, an area riddled with dozens of Quaternary faults that extents from SE of Flagstaff NNW to Utah. Subsequently, northern Arizona experiences dozens of earthquakes annually, most of which fall below the threshold (~ M 2.5) of felt events. Lake Mary Fault bifurcates into several N-S and NW-SE splay faults near the city of Flagstaff (see the figure below, orange circles represent historic earthquake epicenters  An M3.1 occurred near this same area on 11-04-2018, as well as several smaller events.

Flagstaff lies directly along a corridor for natural gas pipeline, major N-W (I-17) and E-W (I-40) interstates, and major railroad line connecting the Los Angeles, CA area with the middle and eastern U.S. A large magnitude, damaging earthquake near Flagstaff could disrupt travel and transport in the Southwestern U.S. for days or weeks causing shortages in natural gas, goods, and foodstuffs. Role of the AZGS Broadband Seismic Network. Of the 15 AZGS broadband seismic stations in our network, 12 stations were used by the US Geological Survey to locate this event.. AZGS' locations are superseded by the NEIC/USGS because they are the authoritative regional network; however, they rely heavily on our stations and our data flow to the Data Management Center. This makes for a excellent partnership for Arizona, with modest seismic activity, but limited resources.

Historical Seismicity. Between 1906 and 1912, Flagstaff was rocked by three nearby M6.0+ earthquakes. Hundreds of smaller magnitude events have occurred in the Northern Arizona Seismic Zone, with scores of events each year. The Oak Creek Canyon fault system west-southwest of Flagstaff is another source of felt earthquakes; on 30 November 2014, a M 4.7 earthquake was felt widely throughout northern and central Arizona, including Sedona – Flagstaff, Arizona.

NOTE: Today, Thursday, 15 Oct. 2020, is ShakeOut day to practice Drop-Cover-Hold On in the event of ground shaking that accompanies modest to large earthquakes. You can register online here and practice the exercise at your convenience. AZGS works closely with DEMA and county and tribal emergency managers to promote ShakeOut.